skip to main | skip to sidebar

Do you know someone moving to Portland in 2015? Probably!

We're over a week into 2015, which sounds very futuristic. So where is my flying car? I remember somebody saying there would be flying cars. Yet, my car hasn't left the ground since that time I took a speed bump on SE Lincoln too fast. It's still the same car. It hasn't changed, and it won't this year. But 2015 will bring other changes. We're seeing them all around Portland, with new restaurants , new transportation lines, and a lot of new carpet. Maybe even new neighbors.

Oregon had the highest percentage of people moving in vs. those moving out of all the states in the US in 2014. A huge number of those people are landing in the Portland area, so you can expect new faces and more people around town. While many grumble about the growth, we understand the draw of the city. So let's welcome them... then encourage city planners to anticipate more housing needs and traffic flow, if they can see to that pleaseandthankyou.

Don't forget that we can help!  If your friends or family are among the incoming transplants to the Portland area, they'll need a place to live. We often work with people moving to Portland. We will help them get to know neighborhoods, familiarize them with available housing, and even show them a commuting shortcut or two. Be sure to put us in touch so we can get them into a great home!

So, who do you know who is moving to Portland?

Real Estate Timing in the Fall

People often ask us about market timing. When is the best time to search for a new home? When is the best time to put our home on the market? The real answer is that there is no real answer. Trying to play the market is a lot like gambling. Sometimes you win, sometimes you lose, and most of the time success is in the luck of the draw. It's best to move based on the needs dictated by your family and job, or to become a landlord based on your long term investment goals.


And yet... RMLS reports that in August (the most recently compiled statistics), the inventory of homes on the market was down to its lowest level in more than two years. That wasn't just because people weren't putting their homes on the market, it was at least in part because sales were up 28% compared to August 2011. And more buyers are out there needing homes. While I still don't recommend playing the market, if you've been holding off on putting your home up for sale, these statistics show that you might want to start thinking about it.


Buyers might look at this and wonder, if inventory is so low, are there enough homes out there to choose from. They're out there, but if you're looking in a high demand area you may have to be patient while looking and move fast and aggressively if you find it. Low interest rates are keeping buyers active, and many of you are looking for the same thing. Despite the occasional challenge, those interest rates are exactly why you should consider looking now - when they go up it could make a huge difference in your purchasing power.

As for the timing, history may show this to be one of the strongest fall selling seasons in years... but we won't know that until it's history. Traditionally a season of slowing down and settling in for the long winter, this year may be different. Sellers are encouraged by the strong market. Buyers are encouraged by unprecedented interest rates. Plus the sun is out, which has a serious impact on showings. So the answer to that question about when to get into the real estate market may be answered with one word: now.

(Also, don't pick on my luck of the draw metaphor. I'm not a big gambler.)

If you think now is the right time, or want to talk about when now might be right, then give me a call.

Email ThisBlogThis!Share to TwitterShare to FacebookShare to Pinterest
Labels: Amy Seaholt, portland real estate, when to buy or sell 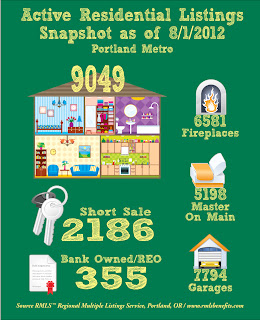 This is a great shapshot of active listings in the Portland Metro area, put together by our local RMLS ~Reginal Multiple Listing Service. With luck they will continue doing them.
Posted by Elena MacPhee | Rose City Realtors at 9:55 AM 1 comment:

Portland's Architectural Heritage Center is hosting their annual Kitchen Revival Tour this coming weekend. The tour opens restored and remodeled kitchens to the public. The focus, as you might imagine from the Architectural Heritage Center, is on kitchens that have retained the feel of the period in which they were built. It's a great source for ideas. Or you can tour and wonder how on earth people manage to cook with so little counter-space. Either way, if you're interested in older homes it's worth your time.

By Andrew Hill http://newhomes.move.com/
Having trouble moving from “for sale” to “sold”?  In this buyer’s market, you are not alone. But there are a few important steps you can take to help yourself standout from the pack. The best thing to do in nearly every situation will be hiring a realtor. Our knowledge of real estate will always be an asset in the process of staging and marketing your home. 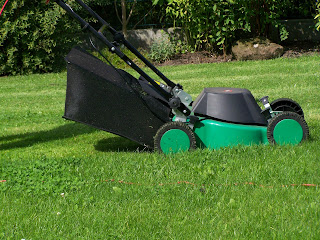 After hiring a Realtor, the next thing you should do to stage your home is improve the exterior. This is, after all, the first thing you’re potential buyer is going to see and you don’t want to start off the transaction on the wrong foot. Mow the lawn, pull the weeds, clean the gutters- all of those chores you hate to do are especially important here. If needed, make sure to give the house a new coat of paint and/or replace any broken windows.
Once you get your shopper through the front door, it’s time to freshen up the inside. One of the first things anyone will notice is your flooring. Tile or wooden floors will be easy enough to clean, but if they are carpeted, you’ve got two options to consider. If the carpet is recently installed, a steam clean will most likely do the job, but if the carpet has been there for a few years, it’s most likely time for new carpeting. Sometimes you have to spend money to make money and this is definitely one of those times.
There is an ongoing debate on how many personal effects should be left in plain sight. While some prefer to hide them all and others say to leave them all out, I tend to go with a middle of the road approach. Leave a few personal items, such as pictures or other family items, but make sure that visitors can easily connect with them. They should speak to the widest possible audience, because you are trying to show them how this could be their new home.
In addition to what they see, the other most important sense is smell. If you smoke, have pets, or just have a home that doesn’t smell too fresh, consider throwing on a new coat of paint. This helps cover up smells that have been absorbed into the walls. Baking cookies and using air fresheners (within reason) can also help.
By following these tips, you can significantly improve the chances of attracting buyers who will be much more interested in purchasing your home. Of course, hiring a Realtor will always be the best way to get your house off the market. For more info on how to sell your home, contact Amy Seaholt or Elena MacPhee, today!
Posted by Amy Seaholt at 1:07 PM No comments:

Value and Space Are So Very Subjective

I was on vacation in New York City last week, taking a walking tour of the Greenwich Village and Chelsea neighborhoods. While on tour, the guide pointed out a street that had front yards - Actual front yards! - and was clearly excited about this 3-foot-deep patch of grass. My first instinct was to laugh, but after spending only a few days in the hustle and closeness of the city, I could see where her excitement was coming from. Space, in New York, is at a premium. It adds tremendous value to a home.

It got me thinking about how our differences in experience can change our perspective and influence our wants and needs when we're looking for a home. In Portland, a high value is placed on homes that are walkable to shops and restaurants, particularly in certain close-in neighborhoods. Those houses have maintained value better during the real estate downturn because native Portlanders have collectively decided that we find it important to, at least occasionally, get out of our cars and enjoy even a peek of sunshine.

It's not important for everyone, though. Recently I worked with some people who were relocating from a suburb outside of Atlanta. They were accustomed to large lots in gated communities, and were having a hard time seeing any value in the close-in neighborhoods that I mentioned above.

In other words, perspective effects experience in nearly every situation in life. Including real estate. Portland was the 37th most expensive housing market in the country last year. Some transplant clients (Atlanta suburbs) think it is absurdly overpriced, while others (New York) thought they could get a fantastic bargain.

Interestingly, nearly everyone comes to the have the same perspective about Portland after living here. People tend to fall in love with it, though it may take a couple of rainy seasons to do it.

If you're looking to move into your next overpriced bargain of a perfect home, give me a call or email.

Spring is coming, and no blustery wind can blow hard enough to keep it from greening our beautiful city. Though the days are still cold and (occasionally) rainy, now is the time to think about what you want to plant and plan for in the warmer days ahead.

If you're in need of planning ideas, put Portland's Yard, Garden and Patio Show on your calendar. The show runs February 17 to 19 at the Oregon Convention Center. Dennis' 7 Dees landscaping hosts the event, which is one of the largest consumer gardening shows in the country. Look for gorgeous showcase gardens for inspiration, and days filled with seminars on how to make those showcase ideas come to life in your own yard.

And if you're a brown-thumb, like me, it's still a wonderful place to get ideas for your dream garden - that I may have to hire somebody else to bring to fruition.


Tickets to the Yard Garden and Patio Show can be purchased a the doors for $12. Kids 12 and under are free.

Posted by Amy Seaholt at 5:19 PM No comments:

Our motto is "Superior service is the difference". That means patience because finding the right home can take time. It means understanding you as a person, because buying or selling a home is a very personal experience.
It also means flexibility to accommodate your special needs, concerns and schedule. And finally it means guidance and expertise: to help you understand the real estate transaction process, to take care of the myriad of details and advise you in making the best decisions possible. Your happiness is our success

Find Us on Yelp